The City of Gillett will mark its 75th anniversary, and everyone is invited to the celebration. Gillett residents, past and present, are encouraged to attend Gillett’s Diamond Jubilee on Saturday, Oct. 5, at Zippel Park.

“I’m excited to be a part of the 75th anniversary of Gillett becoming a city,” said Mayor James Beaton. “It’s an exciting time for Gillett. There’s lots of good stuff going on, and I hope that continues.” Many things have changed since Gillett’s incorporation, while others have remained the same.

“I think it’s good for people to know about the origins of their community … and what hardships and triumphs a community has faced over the years,” the mayor said.

Highlights of 75 years as a city:

Join us for the Diamond Jubilee

The Diamond Jubilee celebration begins at 10:30 a.m. with kids’ activities, wagon rides, and food and refreshments. A cornhole tournament starts at 1 p.m., with a pig roast from 5-7 p.m. and live music by Texwishigan at 7 p.m. in the Expo Building. Pig roast tickets are on sale at Gillett Handiworks, Gillett Shell, The Cracked Cup, and Dr. Drake’s office. Advanced tickets are $12 for adults and $5 for kids 4-12 and $15 for adults and $7 for kids at the door.

Gillett High School will celebrate Homecoming the same week as the Diamond Jubilee, and the Jubilee gives residents not involved in Homecoming a way to show their pride in Gillett. Activities in the park are designed for all ages, so come join the celebration!

The year was 1944. FDR was president, and World War II was raging. A loaf of bread cost 10 cents, and a gallon of gas was 15. Locally, 1944 marked a turning point for the village of Gillett; this was the year Gillett incorporated as a city. The city adopted a mayor/aldermanic form of government with 3 wards – a governmental structure which is still in effect today, 75 years later.

Join us for the Diamond Jubilee Oct. 5

The city of Gillett will celebrate its incorporation with a Diamond Jubilee celebration on Saturday, Oct. 5, at Zippel Park. It’s Homecoming week for Gillett High School, and the Diamond Jubilee is just one more way for Gillett residents to show pride in their community.

The celebration begins at 10:30 a.m. with wagon rides through Gillett, kids’ activities and a brat and burger fry at the food stand. A cornhole tournament starts at 1 p.m., with registration for 2-person teams at noon. A pig roast with all the fixings will be served from 5-7 p.m. in the Expo Building. Advance tickets are $12 for adults and $5 for kids 4-12. Tickets are available at Gillett Handiworks, Gillett Shell, The Cracked Cup, and Dr. Drake’s office. Tickets at the door are $15 for adults and $7 for kids. David Dirks of Texwishigan will perform live at 7 p.m. in the Expo Building.

According to “The History of Gillett,” written by Marie Darrow, Native Americans were the first inhabitants in the Gillett area. The first U.S. government deed dates back to 1856 when present-day Gillett was part of a vast area called the Town of Stiles. As more settlers arrived, the Town Stiles was divided into separate municipalities. The city is named after Rodney Gillett, one of the earliest white settlers in the community. Gillett held its first election in 1868, and Rodney was elected town chairman. He was also the town’s first postmaster and used his home as the first post office.

With a population of 400 residents, Gillett incorporated as a village in 1900. Forty-four years later, Gillett incorporated as a city. In those four decades, Gillett’s population skyrocketed, growing over 300 percent, to 1,253 residents. Louis Zahn, who previously served as village president, became Gillett’s first mayor. The city initially rented office space at physician Dr. L.H. Baldwin’s office, and the City Council met at the Village Hall. The city built a municipal building in 1953 on land that was part of City Park.

The historic buildings on Gillett’s Main Street today provide a glimpse of Gillett’s rich history. The city has changed over time yet remains true to long-standing values of friendliness, prosperity, and community. With a population of 1,303, the city of Gillett offers amenities often found only in larger cities, including garbage and recycling pickup, police and fire departments, community organizations, beautiful parks, a sports complex, churches, a medical clinic, and a K-12 public school.

Celebrating 75 years as a city

Seventy-five years as a city is a milestone to celebrate! Everyone is invited to attend the city of Gillett’s Diamond Jubilee celebration on Saturday, Oct. 5, at Zippel Park. 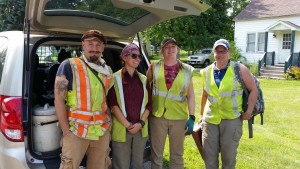 The Wisconsin Historical Society is in town. They are digging looking for archeological items. It will be interesting to see if they find anything!